I have been advised on the steamradio multihull blog to keep quiet when I see some preposterous assertions made there by famous designers. I always think that someone will say something; lots of the guys there seem to know things. But it rarely happens.

One really stuck in my mind though.  A few months ago Kelsall noted that he uses 30% carbon fiber in his wing masts. I kept waiting, but nobody questioned him on that. So maybe school has to be in session.

First, surely everybody knows that a long, slender composite part like a wing mast must have at least 70% of the fibers in 0 degree.  Ted van Dusen noted to me when he built a couple of critical masts for my boats, that had to be built with too small diameter, he went to 80% in 0 degree, just to be sure.

OK, so if all the 30% carbon was in the 0 degree, that is still less than half the 0 degree fibers as carbon.

That is bad, bad, bad.   My readers all already know that the stretch to failure of carbon fiber is around 1%.  And that of E-glass is around 6%.  The carbon in the wing mast would have to fail completely before the glass even helped with 20% of the job.  I was dying to know; did he not believe in 70% zero degree? Or in rule of mixtures.  Getting everything possible right the first time is important.

Ron Reichard explained that with carbon in the 0 degree, glass can be used in the off-axis fibers. That lowers cost and even adds a bit of resilience.

I will have more on wingmasts next month, including a study that I co-authored with Dr. Paul Steinart on a FEA study of wingmasts, and composite hounds. 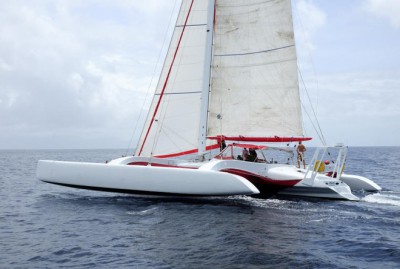 4 thoughts on “Rule of Mixtures-Wingmast”