I see over at Steamradio that while I was gone, some guys were having a religious experience building a 42′ KSS hull in 4 days with a half dozen people. I watched the guys at Sea Island Boatworks build Peter Cromwell’s 56′ first hull in 4 hours. Plus assuming a half day bagging each of the two panels.  Add another half day for adding sheer timbers.  But still not 4 days total.   And they were joined, not just proximate like the KSS pictures show.  And no religion involved.  And when he was pissed, Keith did the 40′ main hull in the DVD again in less than 3 hours.  Still no religion.  Pic shows the hull spread.  It will be pulled back in when keel is cured.

While on the trip I did work out an improvement to a composite rapid build that I published in early 90s, using CM hull for a female mold.  I built the Geko amas that way and Kevin in Kauai did a couple of cats that way.  I sorted out much faster steps.  I have to squirt 2 part poly on the spaceship before I have time to model and publish it. 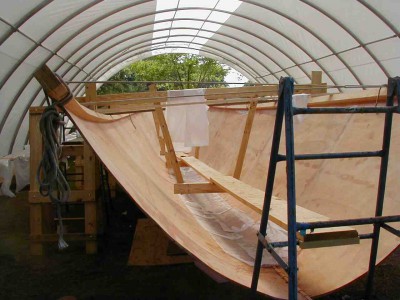