The Worst Seminar at IBEX 2013
Ok, the presenter was good. Aaron Turner seemed very earnest and sincere. And he seemed to think it unremarkable that 5 years was spent doing the small amount of design work that was done.  In one way it was like the Americas Cup.  In both, imagine Rutger Hauer intoning “We can spend money in ways you people could not imagine”.
http://network.ibexshow.com/networknow13/public/SessionDetails.aspx?SessionID=128
It was just that it was the story of a slowly moving train wreck of boat design. The only lesson to take from it was relief that I had no involvement in that project. In a way it was like watching Snakes on a Plane. You know it is so bad, but you have to keep watching.
The paper was about the legendary architect Frank Ghery designing a yacht. It could have been a good exercise. I feel that crossing between disciplines can be extremely valuable. This was not that. Actually, virtually everything functional, including the hull, was designed by renowned French yacht designer German Freres. What Frank did was design the cockpit, windows, hatches and interior. That was all. It took 5 years of nearly full time work by the presenter. That was the other thing. It was kind of like a Chuhuly glass sculpture in that the presenter would do all the work, and Frank would merely choose between 8 or 10 options at each stage. But it has his name on it.
And what was with the client who not only tolerated 5 years design just to do the fluff, but his requirement that the boat be fast seems to have been completely ignored? My customers wouldn’t allow 5 days much less 5 years to design that fluff.
One remarkable choice was that every simulation was not done with CADD, but on the band saw. The presenter proudly does not do CADD.
In architecture school, my professor Phil Thiel (Webb Institute) designed an experience quantifying tool called SEEPE. (If I remember the spelling) Only now found online as http://www.edra.org/sites/default/files/publications/EDRA04-Thiel-374-378.pdf
It would allow designers to quantify the experience their design production would create. This project really needed SEEPE. One of Prof Thiel’s rules was “compare simultaneous alternatives”. The presenter did that, to extreme. The method was stellar. The result so sucked however. The window and hatch shapes seen from in the boat reminded me of the bamboo prison in Apoclyplse Now. It would never be a pleasant space. Others voiced the same feeling. Five years of simulations on the fluff, and the results are a disaster; as a boat. I have tried to find pictures of it on the internets, but oddly, none exist. You could thus understand me at a glance if you saw them. Imagine a large window with a dozen snakes frozen on it in mid wriggle. Snakes on a boat!
But what do I know. Maybe it will sell at Sotheby’s next year for $50 million.

One other seminar, on the law and ownership of your design, was very valuable. He cracked me up however as every slide with text had at least three misspelled words in it. Wasn’t that one of the ideas in Body Heat? Finding a lawyer who couldn’t spell? He was not typing on the fly. These were digital slides that were surely studied back at the office. 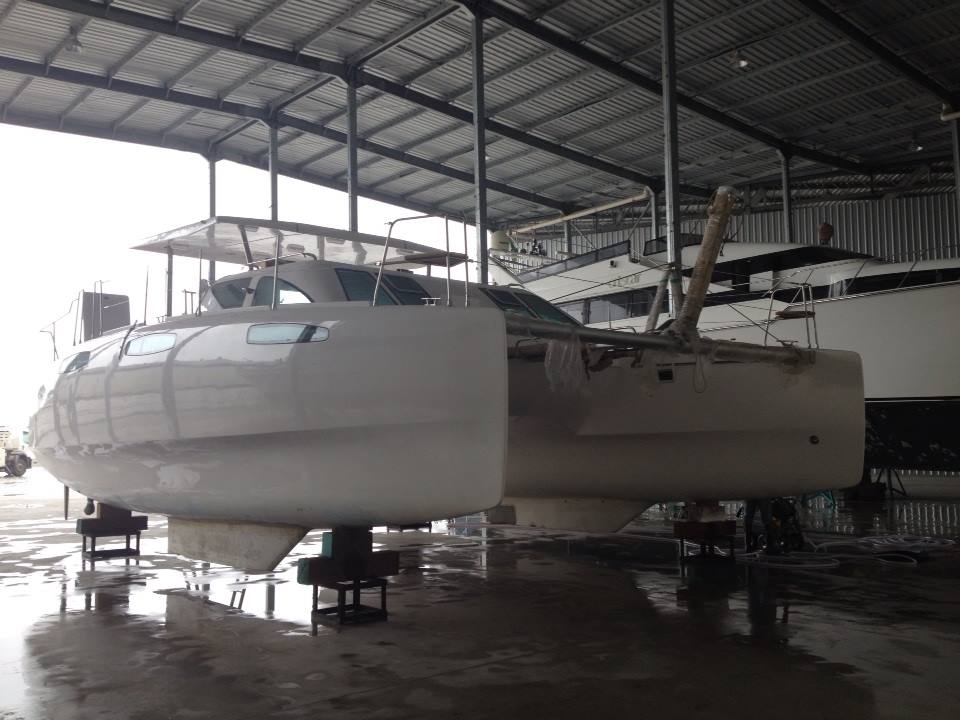 Another 37′ KHSD cat is underway in Brazil.  I wish it had boards instead of keels.

Ken Lincoln, the boat building whiz at the former Olympic Boat in Port Townsend used to complain that every time I went to a composites seminar, his workload increased. I think he was talking about in the late 80s when I learned at a MACM conference that post curing room temperature epoxy improves it’s properties,  just like it improves those of exotic epoxies. One more job for him to do. Ken would also grumble about the best seminar at the last IBEX. More to do.

The best seminar at IBEX 2013 was the one on bonding to infused parts.  The speakers were, and I think this is a hot link….

It had an armload of information that changed the way I do laminating.  First, infused parts are harder to bond to as the degree of cure is greater.
One change for me was the solvent cleaning of the part. Typically I have used a solvent dampened cloth to remove the sanding dust, and clean at the same time. Two for one.

Bad idea as the solvent can force contaminants into the sanding grooves or even the fibers. Solvent clean before sanding. One more job.
Also, the best solvents don’t flash off immediately as JB Carrell (right spelling? I forgot to get his card) of MAS epoxy reminded me. He has a Green Clean product that cleans better and flashes off much later. I will find that link when I get back to office.

Next, I always assumed that grinding or sanding the part was a one-time thing. You do it and it’s done. I was wrong.
One of the speakers anthropomorphized it something like this. “Imagine the electrons in the part are like kids at a rock concert. If you stir them up, they will raise their hands up. The electrons get excited by recent sanding and bond better, but will lose interest after a few days.” I knew that grinding would give a mechanical bond, but grinding or sanding just before secondary bonding also gives a chemical bond. That is a much better bond. Sorry Ken. That might mean grinding or sanding twice.

I had to be away for a couple of days. I got all the books and DVDs out, but the study plans had to wait until I take them to the printers. Will print and post the lot on Monday.

Faamu Sami, now called Pipeline 3 , KHSD 46 tri, was relaunched at the Lyman Morse boatyard recently. You can’t see much about the new bows here, but this video is all we have. I wonder who did the new laminate design work? I did the new lines. I think. http://www.lymanmorse.com/boatDetails.php?boatID=165#prettyPhoto/0/ 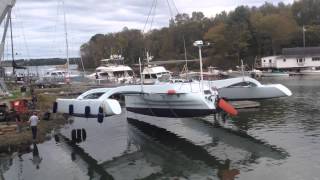 I got to go on a couple of them.

Typically my cats, and others, get burdened with enormously heavy aluminum and tempered glass sliding doors at the cabin back.   And we try to save weight everywhere else.

These structural plastic trucks and track channels look like a great way to escape heavy, clunky sliding doors. I will design some details soon to use these. Teak Isle.  www.teakisle.com

These plastic high temperature exhaust parts caught my eye at IBEX. I will find the link in my bag of handouts shortly. No more ugly engine rooms.

IBEX organizer and renaissance person Barbara Jean Sunshine Walsh “At #IBEX13 I had some postcards on my desk with a notice “Postcards from the Future” and invited speakers to fill in their home addresses and give me a topic, with the promise that I’d write them a postcard poem — In The Future — not to exceed 34 syllables. Nine of them took me up on my offer. This is the first one, based on a true story, told to me years ago by Clean Marine Systems’ David Flagler after his wild ride on a boat designed by Kurt Hughes. The best part of the storytelling was just as he finished, we got out of the cab, walked into the Miami hotel where everyone was staying, and there was Kurt sitting in the Lobby. Great moments from IBEX Past.”

I love these luscious glow in the dark switches. I want them all over my present composite project. Wes Garde