I found a whole lot of videos of my very early 26′ trimaran design, Caiman, from UK. That tri is significant in at least one way. It was back in the late 80s that someone named Kelsall visited its build site. I was practially unheard of as a designer then. While there, he decided to read my CM construction manual. I was later told that, where in the book I declared that I thought Nick Bailey was the best designer in the world, it enraged him. And didn’t KSS appear shortly after that? I had been doing CM since ’82.

Then later seadog Chris Anderson held ocean racing seminars on Caiman for its new owner.  I recall something about an upper coming loose…

These are not Muffalo quality, but interesting.

And if I may, thats a pretty good looking boat for a nearly 30 year old design.   The design has been updated, but there wasn’t a lot to improve.  Guess I could slap it with a reverse bow stick, but that is more asthetic than anything. 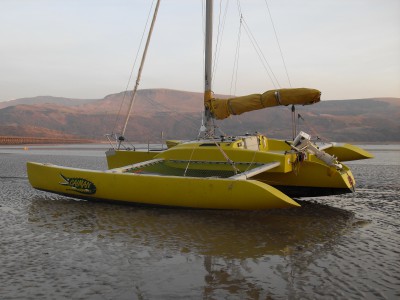