Not actual boat but boat construction.  On the lunar lander dwelling, my house built like a boat, I had planned to use the 3M VHB tape to stick the acrylic dome panels down.  I had understood that better results come from using an adhesive promoter in this cool time of year.  Uline, my tape supplier would only sell me large quanties of it.  I now now their minimum was enough to do about half a kilometer of tape.  Devon at 3M only had one idea of who in Seattle had some to sell, and they did not actually.  I had given up and went to Fish Expo.  At the Fisheries Supply booth there they had a 3M catalog.  Fisheries carries not the exact same AP111, but close enough, Tape Primer 94.  Fisheries comes through.  http://www.fisheriessupply.com/ 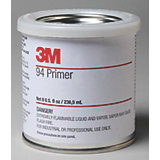